Luoma-aho in Alajärvi – Why are we here? 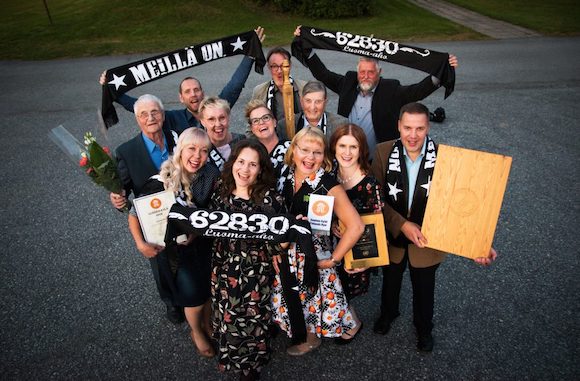 Mäkelä Alu’s production facilities are located in South Ostrobothnia, in a small village called Luoma-aho in Alajärvi. We have been operating here for over 80 years now. We are very proud of our location, especially now that Suomen Kylät ry named Luoma-aho Village of the Year 2019. The picture shows people from the village association and Esko Mäkelä in the middle. Picture: Henri Ruuska.

Luoma-aho is a thriving village of 350 people that has more jobs than residents. The village is home to several industrial and service sector companies. Mäkelä Alu is actively committed to supporting the development and vitality of the village.

“Being located in Luoma-aho means much more to us than just having good logistics connections. My grandfather Fredrik Mäkelä founded the company in Luoma-aho in 1937. My father Esko continued the business, and during our 80-year history, we have grown significantly and witnessed various phases, war and recession, good times and bad times,” says Petri Mäkelä, the Chairman of the Board at Mäkelä Alu.

“Our mission is to improve the competitiveness of our customers. However, improving local wellbeing is also an important part of our mission. We are a major operator in our region, and we employ nearly 300 people. We play a key role in the development of the local community as well as the regional economy. We always make decisions on a long-term basis and strive to collaborate with our staff, the community, and the entire region to ensure that everyone can live and work here for the next 80 years as well,” Petri adds.

The story of our extrusion line

Young Esko Mäkelä was buying his first extrusion line in Germany in 1989. It was an important deal, both for Mäkelä Alu and for the company selling the machine. Once the deal was concluded, the German business partners suddenly burst into applause and cheers. This must have been an important deal, Esko thought. Later, it turned out that something else had happened at that very moment: the Berlin Wall had fallen. However, that moment remained an important milestone in the history of Mäkelä Alu, as it marked the beginning of a new era: the production of aluminium profiles, which still continues to this day.

Active investment in the modernisation of production

Three years ago, Mäkelä Alu started implementing large investments, amounting to approximately 10 million euros in total. The first thing on the agenda was updating the aluminium extrusion line that Esko had purchased 30 years ago.

“This type of upgrade is a significant and laborious task. The old extrusion line was replaced with a modern P4 extrusion line system. The complete reconstruction of such an important line requires careful preparation, and its start-up takes several weeks,” says Production Director Tomi Pilbacka.

Deploying new technology is not always the easiest way, but it is driven by the desire to be a pioneer and the goal of continuous improvement.

“Between 2018 and 2019, the updates continued by investing in, for example, the high-bay warehouse area and a new paint shop. We also make intangible investments by providing further training for our staff. Having multi-skilled staff is important for the success of our company,” Pilbacka adds.

In recent years, Mäkelä Alu has invested in its surface treatment facilities. The company has opened a new paint shop in Voikkaa and modernised its anodising plant. The functionality of the paint shop in Luoma-aho has also been improved.

“Our goal is to be the leading provider of surface treatment solutions for aluminium profiles. Our aim is to offer cost-effective solutions for our customers, for example, in the form of additional services, such as providing warehousing for surface-treated profiles,” says Sales Director Mika Korkea-aho.